Barbie has come to Las Vegas. It is said that if you’ve made it big, you’ll play Vegas. And this little international icon is here now. She is a must-see for a glimpse of the history of American culture.

The exhibit, titled Barbie®: A Cultural Icon, is at The Shops at Crystals in Las Vegas. Pete Housley, Exhibition Executive Director said it best. “So much of the entertainment and fashion culture of Las Vegas is mirrored in the generations of Barbie. The Barbie Exhibition is perfectly positioned in the middle of The Shops at Crystals alongside many of the world-famous fashion brands that Barbie has worn through the decades.”

The Expo includes more than 150 Barbie dolls from 1959 to the present. As such, it mirrors cultural changes in America. Barbie was created by Ruth Handler, the founder of Mattel, and was named after her daughter Barbara. Handler noticed that her daughter was playing with nondescript paper dolls and decided to create a three dimensional life like doll. After extensive design work Barbie was born.

One of the missions of the Barbie evolution was to show young girls basic fashion and let them know that they could be anything they wanted to be when they grew up. The exhibit displays various Barbie dolls illustrating the changes in society.

The exhibition includes the very first Barbie doll produced in 1959 and leads guests through the decades, paying homage to Barbie and the world around her. Visitors will see vintage dolls, artifacts, and life-sized fashion pieces that come to life through tastefully custom-themed displays. Video media and interviews with Barbie designers expand the narrative.

A 1960’s Barbie wore clothes fashioned after a Jackie Kennedy wardrobe. As the space program heated up in the 1960s, Mattel created Astronaut Barbie.

In1967, the first Barbie celebrity doll – based on the famous model Twiggie – was created. And in 1968, in support of the civil rights movement, Barbie introduced her new friend – a black doll named Christie. But, as times changed, in 1980 Mattel created black and Hispanic dolls named Barbie. All of these changes in American culture are there to see mirrored in the Mattel creations.

During the 1980s, Barbie became a fashion and power Icon. Some of her clothes were designed by Oscar de la Renta, others by Bob Mackie, who also designed outfits for Cher. A CEO Barbie was also developed. The basic theme for the dolls was that girls could do anything.

In 1992, Barbie decided to run for president and thereafter a Barbie presidential candidate was introduced every four years. In recent years, Barbie dolls with different body shapes have been developed. Barbie continues to depict female heroes who inspire girls by breaking boundaries and expanding the possibilities for women everywhere

The exhibit is a capsule of American history and is interesting for folks of all ages and genders. Even my husband enjoyed it. For ticket information visit Barbie Expo. 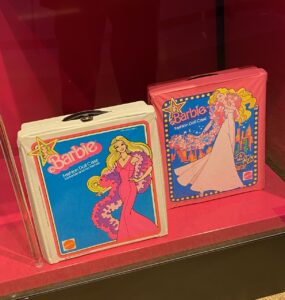 February 4, 2021 Dianne Davis Restaurant Reviews 1
Spread the love
Spread the loveProsecco Fresh Italian Kitchen  is one of our favorite Italian restaurants and it is just 15 minutes from our home in Henderson, Nevada, a suburb of Las Vegas. The eatery offers an extensive […]