9th Annual Catalina Film Festival 26 miles across the sea hosts one of longest running venues on the Island.

Avalon CA, September 26 through the 29th, 2019 inside the historical Santa Catalina Island Casino Theatre. One of the longest running venues on the Magical Movie Making Island.

Day 3 Friday September 27th of the Catalina Film Festival, was kicked off on the island with a VIP pre red carpet party at the gorgeous estate of Ray & Kim McKewon in Hamilton Cove. Soon after, Catalina local, Lolo Saldana, whose documentary “Lolo and the Barbershop” film played before the World Premiere feature “Cicada Song”, walked the red carpet and was honored with a Catalina Spotlight Award for his contributions to the island as well as Festival pioneers Chuck Liddell and Bill Bushing, Co-Creators of the one year only (and done) Catalina “Island” Film Festival, as they called it, held in the Casino Ballroom and Avalon Theatre 40 years ago in 1979, were presented with the “Catalina Tribute Award”. At the original CIFF Liddell says 45 films were presented along with 5 workshops. The Feature Film “Willie Nelson 4th Of July” and the Premiere of Golden Globe-winner Joseph Bottoms’ “The Dove” (which Bottoms was supposed to attend) and a re-screening of the “Creatures of The Black Lagoon”. As fate would have it, Joseph Bottoms was in the Friday night’s World Premiere, “Cicada Song”, and was on hand to finally attend and present Liddell his award, 40 years after the 1979 festival. In 2011, 31 years after the one and only CIFF, Ron Truppa, Founder, and Co-Founders Delious “Tim” Kennedy and Xiomara Ferretti-Truppa, created the Catalina Film Festival (CFF), now in its 9th consecutive year. John Tusak, Avalon Casino organist has continued to play wonderful classical movie standards for the past 21 years for all events held at the historic theatre on 1 of 2 Page organs left in the world. 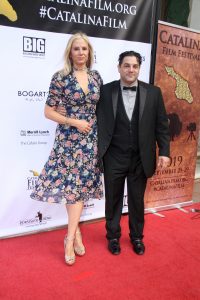 Catalina Film Festival Day 4 began with a spectacular VIP party hosted by Gary and Kelly Johnson on their breathtaking estate atop the Catalina Mountains. The highlight of the evening was a toast to the drone! Redcarpet festivities included Mira Sorvino recipient of the “Avalon Award” followed by the Catalina Film Festival World Premiere of “Badlands” and Afterparty hosted by Toyon Grille.

Screenings throughout the Island included:

Closing ceremonies were held at The Queen Mary on Sunday September 29th 2019. Catalina island express and Queen Mary Charter provided non-stop ferry rides to and from the island in less than 60 min. Photos by Gisele Ozeri @shooterdiva