Auction will include Parisian haute couture and Hollywood designs worn by Dame Olivia de Havilland and more. Catalogue is available online now and the auction is September 17, 2019.

An in-person preview will be held from September 12th  through September 16th at Hindman Chicago, 1338 W Lake Street. On display at Hindman is a breathtaking portion of the auctions highlights, iconic legendary actress Dame Olivia de Havilland’s collection of Parisian haute couture and Hollywood designs from 1954 to 1989.

Dame Olivia de Havilland (b.1916) is a British-American actress with an impressive career in film from 1935, during the Golden Age in Hollywood cinema, to the late 1980s, when she stopped acting. De Havilland is one of the  greatest actresses of all time, with a career that includes nearly 50 feature films. One of her most remembered roles was Melanie Hamilton in Gone with the Wind(1939), in which she plays Scarlet O’Hara’s sister-in-law.

De Havilland, a lifelong devotee of the House of Christian Dior, collected designs by Dior himself, as well as by Yves Saint Laurent and Marc Bohan for Christian Dior. A number of beautifully preserved bespoke designs can be seen at the preview, for sale at the auction.

Three Dior ensembles on offer at the auction were actually worn by Ms.de Havilland for her roles in movies, including Light in the Piazza (1962) and Hush…Hush, Sweet Charlotte (1964). Also included is a coat worn for her role in the Broadway production of A Gift of Time (1961), and designs worn to premieres and special showings of films including a 1961 showing of Gone with the Wind (1939).

Each of the garments required a minimum of three personal fittings, and they look today, hanging in pristine perfection on the racks at Hindman, as though de Havilland had just stepped out of them. The essence of her dainty, feminine form is expressed by the subtlety of the tailoring, the clean, clear lines. Vividly colored, the hems and finishes exquisitely hand-rolled and the shaping an exercise in perfection, they appear today much as they looked when they left the atelier. An unusual and particularly intriguing aspect of this collection is the extent that the pieces are preserved as outfits: skirts with blouses, dresses with coats,  (one with an interior corset) and in a nearby case are displayed shoes, hats and bags to match.

As always, Timothy Long, Hindman’s Director and Senior Specialist of Couture and Luxury Accessories has taken enormous care in carrying out the curating of these masterpieces of couture. He expressed great appreciation at how closely the family worked with him to put together the collection, in situ with photographs of the star wearing certain articles of the clothing. Long showed me the meticulous Christian Dior labels inside, which reflect the date and season of creation, and are inscribed with a number that allows The House of Dior to look up intricate details of provenance. Ever attentive to nuances of fabric, cut and excellence of workmanship, Long pointed out one particularly magnificent sleeveless dress entirely composed of intricate layers of hand-crafted, hand-sewn, and hand-positioned lace flowers over an exquisitely fine mesh slip base. “See how the lace is actually molded to the shape of the body!”, he exclaimed.

“Dame Olivia de Havilland is a timeless fashion icon and this couture collection is nothing short of historical, both for its connection to the Hollywood star and for its intrinsic value in the history of fashion,” said Long. “Olivia’s collection, along with the auction’s other offerings, must not be missed by fashion experts and enthusiasts alike.” He mused, “This group is a quite personal and nostalgic- as well as culturally significant- aspect of our Fall Fashion Auction. Preview attendees and auction bidders would do well not to miss the very special evening gowns designed by Hollywood costume designers Edith Head and Paul Zastupnevich, worn by Ms. de Havilland to present, accept, and attend at awards ceremonies”.

In addition to the Christian Dior clothing and accessories, the collection includes six paper programs, printed by the House of Christian Dior, detailing the garments included in Paris fashion shows attended by de Havilland. Each program features hand-written notes by the actress, including her thoughts on the collection and scheduling details. With these programs are two photographic prints, provided with the clothing, of de Havilland with Christian Dior himself.

Hindman conducts over 100 auctions annually and appraises thousands of objects throughout the year in addition to handling major single-owner collections. The firm is currently accepting consignments for fall and winter sales. To contact Hindman’s Chicago headquarters, visit hindmanauctions.com or call 312.280.1212. 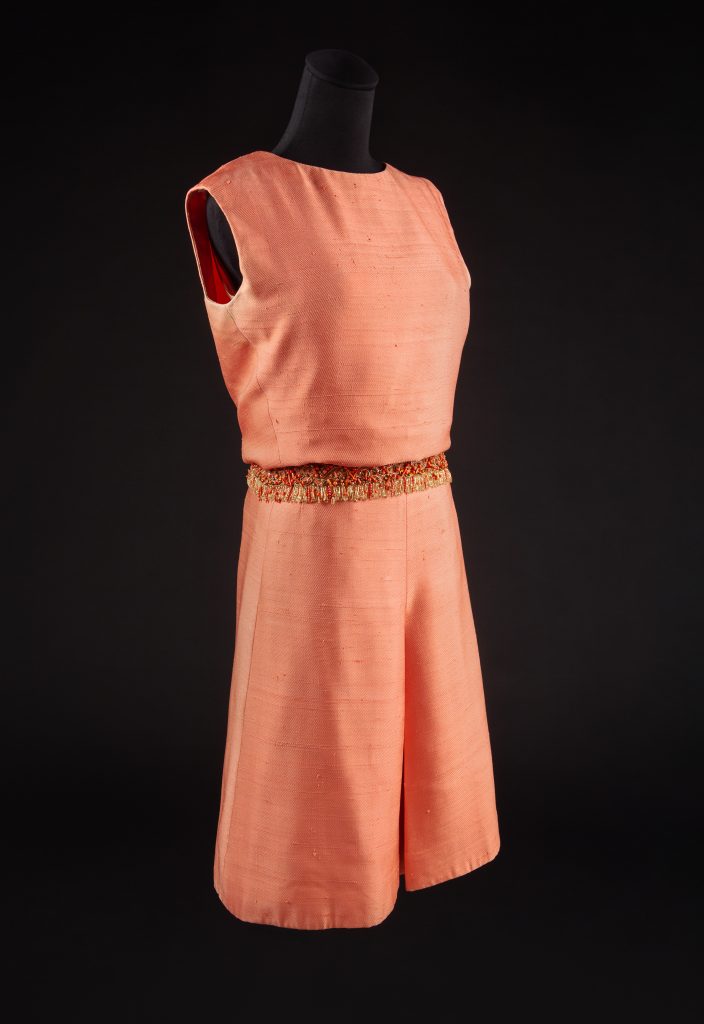 Christian Dior by Marc Bohan Haute Couture Ensemble, Spring/Summer 1964, worn by Dame Olivia de Havilland on the cover of her 1961 book “Every Frenchman Has one”

All photos courtesy of Hindman LLC.