By Laurie Graff and Sid Ross

The house lights dim, the orchestra plays and we fill with anticipation. The curtain comes up on the backstage world of New York Musical Theater, in the newly imagined musical hit, Tootsie that garnered 11 Tony nominations in an evening of non-stop entertainment with exceptional talent.

SPLASH theater critics, Laurie Graff (LG) and Sid Ross (SR), saw the show at the Marquis Theater on Broadway. Here’s what the they have to say: 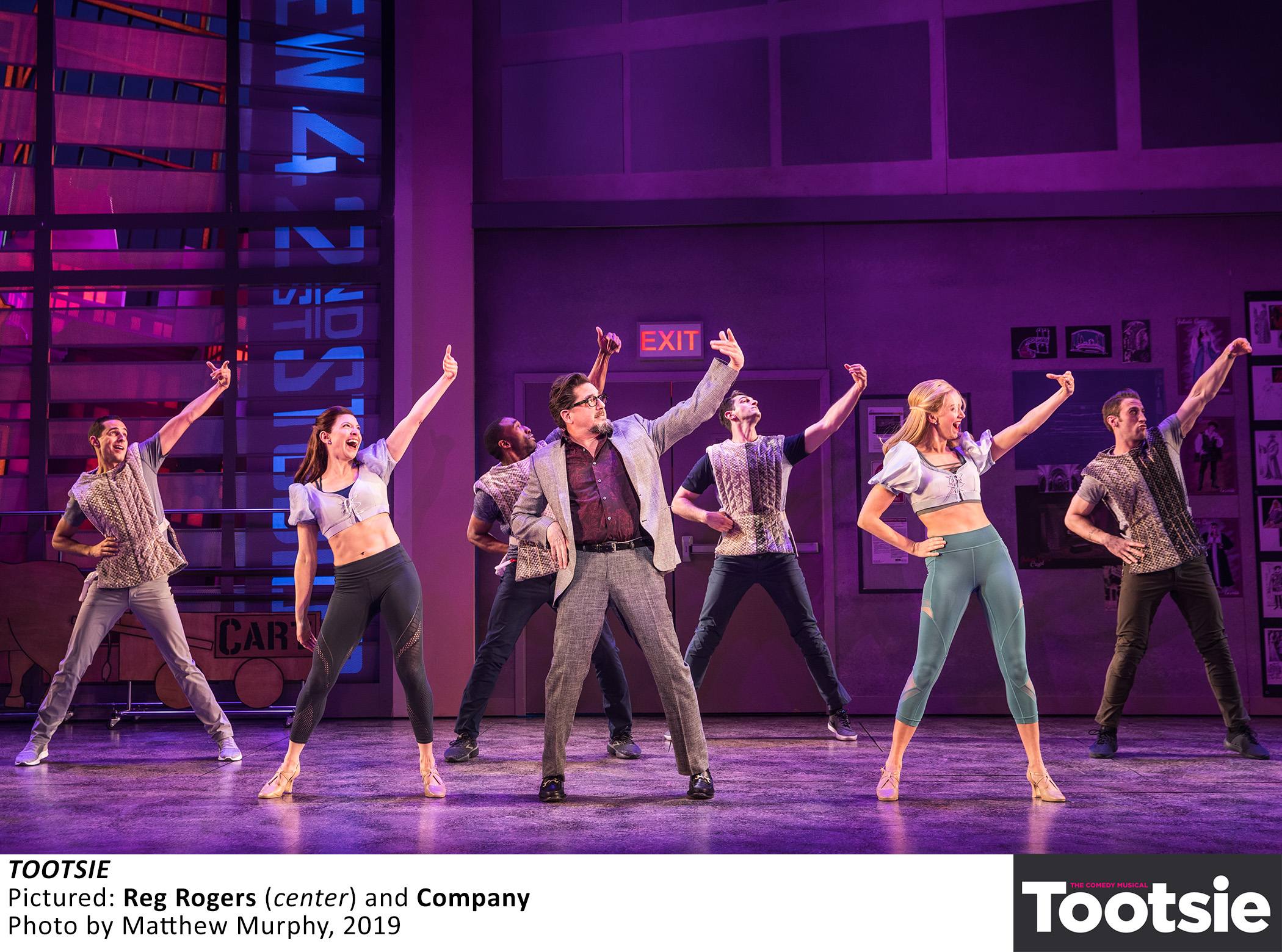 SR: The show is quite an experience. I loved the opening—it drew the audience, quite literally, into the world of the show, and instantly and elegantly sets the tone for what we’re about to see: a smart, funny, sophisticated take on both sexual politics and the Broadway musical and, immediately, you know you are in good hands.

LG: They had me from the overture. I was entranced hearing an actual overture. David Yazbek (The Band’s Visit, The Fully Monty) is so gifted, his music is electric and I loved being thrust into the world of a struggling actor in musical theater. Here, instead of the character, Michael Dorsey, posing as a woman for an acting job on a soap opera, he pulls off the stunt to get one in a Broadway show. Robert Horn (13; Dame Edna) is able to show male dominance in the theater world, with a book filled with hysterical, rapid-fire one-liners.

SR: The #MeToo language and themes are also a big home run for me. But, of course, I can’t get enough of a pro-feminist track in a big-hit, mainstream Broadway show. Tootsie goes there with wit and relish—there’s even a point where somebody says, “I’m with her!” 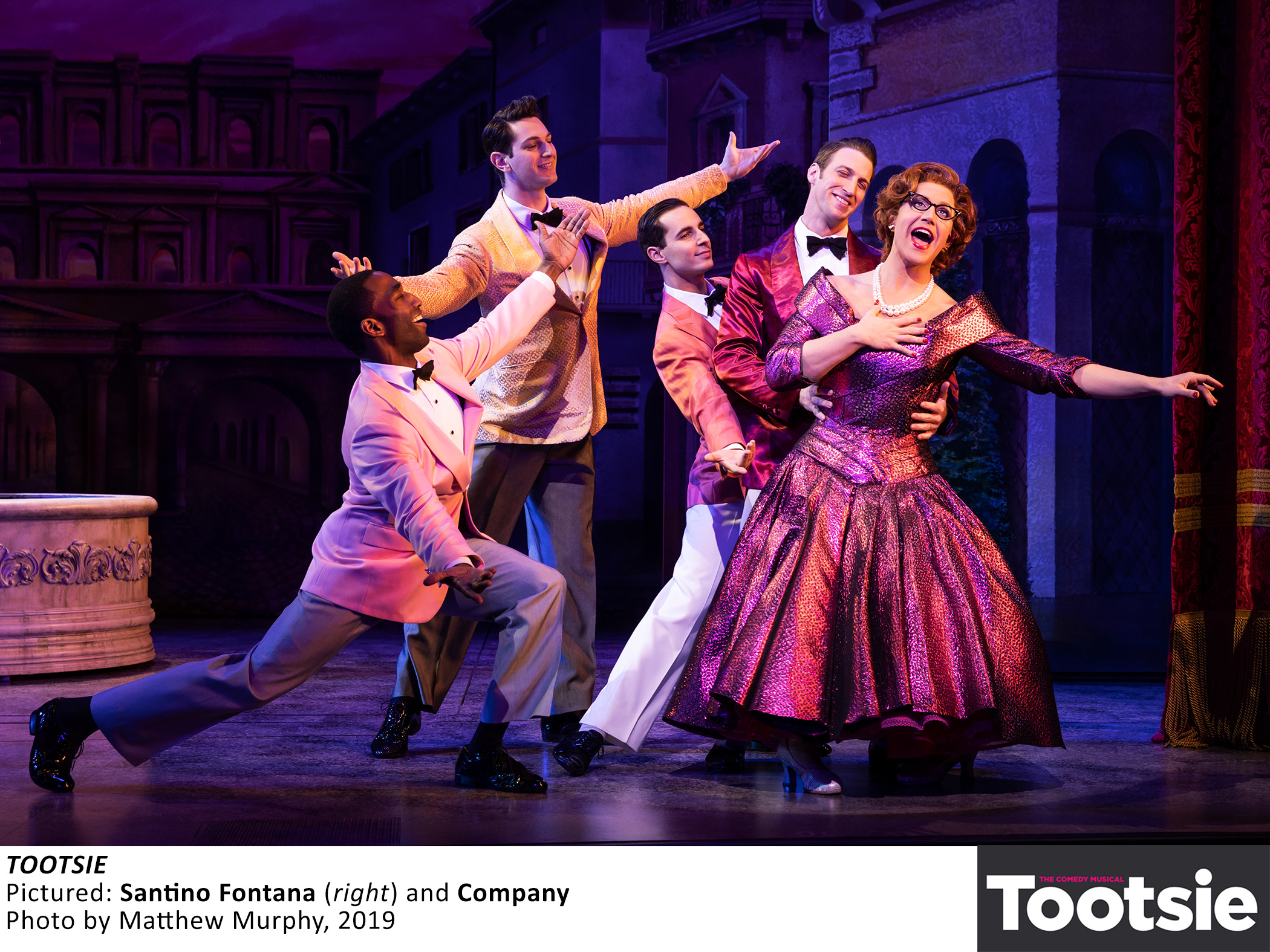 LG: It was so funny to see it all play out. In Juliet’s Curse, the show-within-the-show, the female producer, the hysterically funny, Julie Halston, discovers her power. Counterpoint to that, Reg Rogers, just wonderful as the casting couch theater director, Ron Carlisle, learns a few lessons. The fun also accelerates when Michael, as Dorothy Michaels, just so brilliantly played by Santino Fontana, falls in love with his co-star, Julie, the lovely Lilli Cooper who does not know Dorothy is really a man. It all made way for delicious double entendre.

SR: It also asked questions of personal and sexual identity quite movingly, particularly with a lovely number called, “Who are You?” in which Michael and Julie try to figure out, with no real clues, the inordinately complicated relationship they find themselves in.

LG: Remember when Julie remarks how complicated it is now to be a woman and Dorothy/Michael agrees… and gulps that glass of wine? Director, Scott Ellis, did a terrific job with physical comedy and the audience was in stitches simply watching a door open, or seeing Michael and his roommate Jeff, the terrific Andy Grotelueschen sit in silence on the couch. 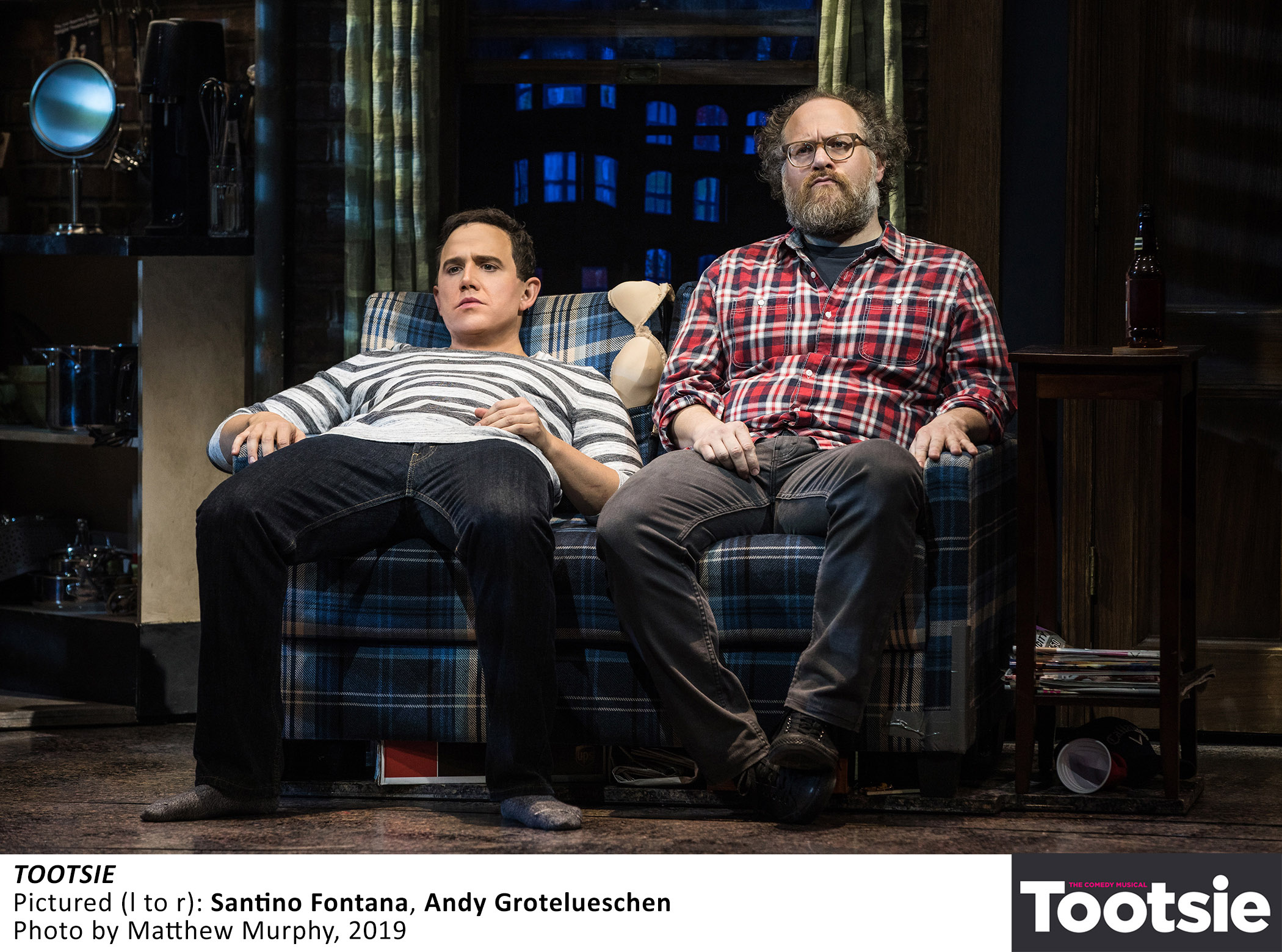 SR: Yes, it slowed expertly for the sake of comic timing. The actors were never scared to wait for it. Scott Ellis’s direction found the time to fully realize character dimension and keep the show moving. The set design by David Rockwell was both detailed/realistic, like Michael and Jeff’s apartment, or elegantly abstract like the various Manhattan skyline backdrops. And the costume design by William Ivey Long was really smart. Sometimes there was a magician’s feel to it, like, “How does he get those red manicured nails off so quickly?” The show even allowed you to get closer to Michael’s gender-bending costume changes than the movie ever did, or could.

LG: I felt this piece was totally its own thing, and while I obviously thought somewhat of the movie – how could you not? I was completely into this world, this show and wildly impressed to the extent the premise lent itself to this medium and how great it was done.

SR: But you’re not supposed to forget the movie, because it had something to say – even a few decades ago. It said it well, and also influenced moviemaking along the way. One thing I felt was that the show stayed a little too close to the movie in the Dorothy/Michael ‘reveal.” That moment, in this singing and dancing Tootsie, I thought cried out for a song. However, there is never a moment when you find yourself pining for the movie. Half the audience I’m sure didn’t grow up with it, as we did, but I don’t think they cared about it either.

LG: I totally remember the day I saw it and even who I went with. Dustin Hoffman was so terrific it was hard to imagine someone else could so nail the role – and in a musical no less.

SR: I felt we were watching Santino Fontana’s Tootsie in the way that people once said, “We saw Zero Mostel in Forum. ” Fontana was not only authentic and powerful, but his voice seemed to have a melting, sliding register that allowed him to present conventional gender on cue.

LG: John Behlmann is great as a lovesick stud, Max Van Horn, and Michael McGrath terrific as agent Stan Fields. And did we talk about the character of Sandy? 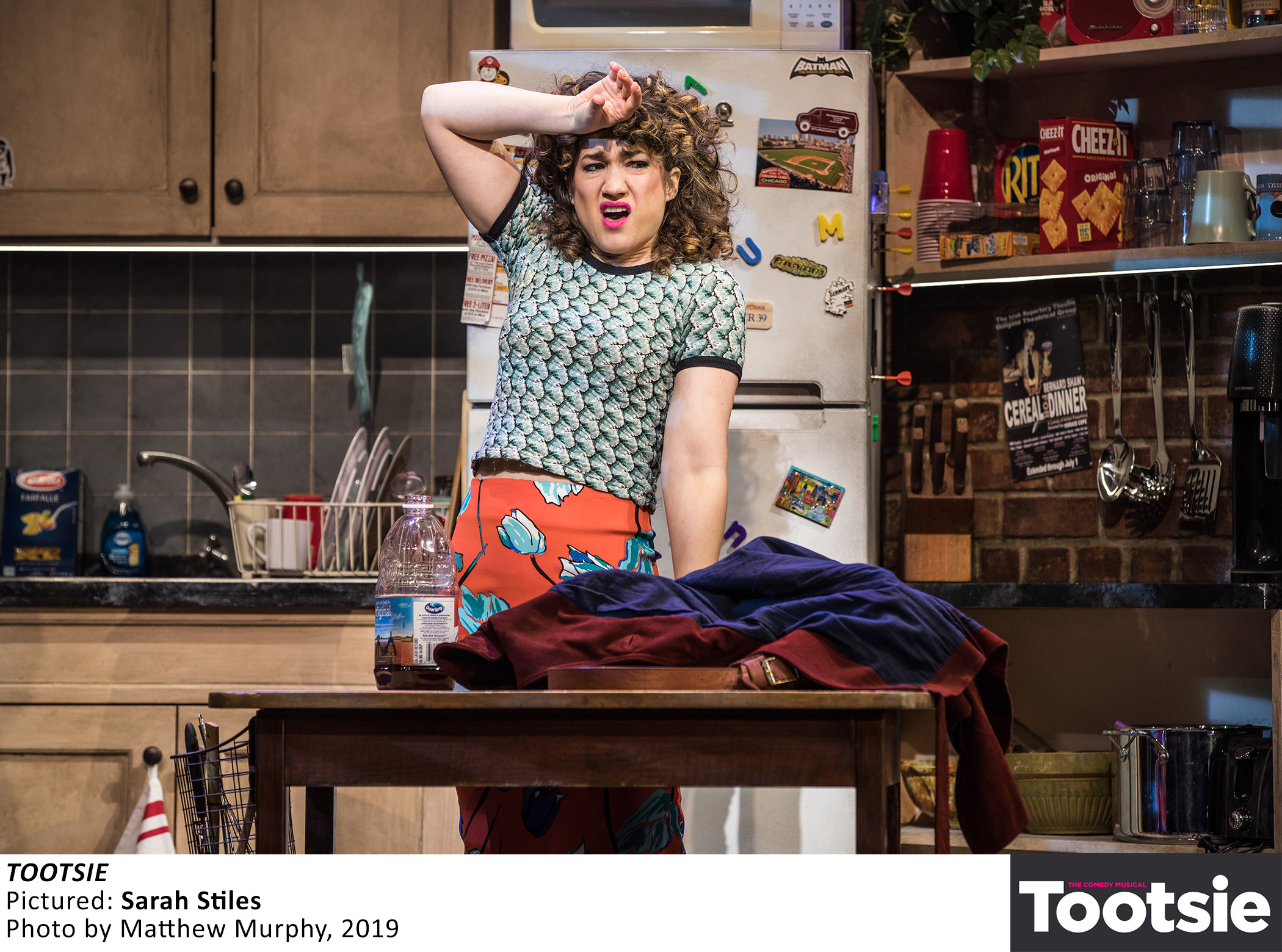 SR: Let me just say this: Sarah Stiles, as the beleaguered Sandy, can do whatever she wants. She’s a crucible of complex, often hilarious kinetic energy whose contents she seems to release however and whenever she wants or needs to. And, I won’t give it away but to say that Andy Grotelueschen’s laconic, dissonant Jeff is perfectly realized.

LG: I think Tootsie’s going to sweep the Tonys, so people should get their tickets now.

On Broadway at the Marquis Theatre (210 W 46th Street)

The world premiere comedy musical TOOTSIE tells the story of a talented but difficult actor who struggles to find work until one show-stopping act of desperation lands him the role of a lifetime – as the star of a new Broadway musical.

TOOTSIE is based on the story by Don McGuire and Larry Gelbart and the Columbia Pictures Motion Picture produced by Punch Productions and starring Dustin Hoffman.

Tickets for TOOTSIE are now available at the Marquis Theatre box office and at www.Ticketmaster.com or by calling 877-250-2929. Tickets range from $79-$169.